Also known as "sub-Q" or "SC," this refers to giving an injection or infusion under the skin.

Regarding diabetes, subcutaneously is the most common form of administering insulin, though it can be given intramuscularly for faster action or intravenously for diabetic emergencies and the most rapid onset of all. Not all insulins may be given intravenously though-only the clear soluble ones which are either fast or short-acting can. 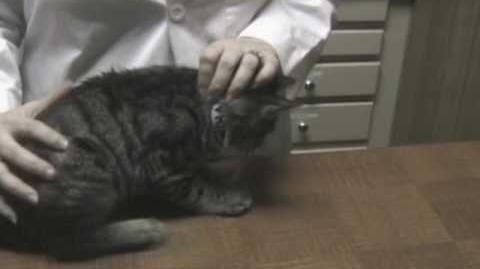 Diabetic caretakers often find themselves in the position of giving subcutaneous fluids for other conditions, such as dehydration or Chronic Renal failure (CRF). Subcutaneous fluids [1] help rehydrate to the body, keep toxin levels down, and replenish some of the electrolytes that are lost in the urine and not replenished by drinking water.[2]

Your veterinarian may prescribe one of several types of subcutaneous fluids. The fluid type [3] and volume to administer depends on your pet's condition. One of the most common fluids is Lactated Ringer's Solution, [4] used to replace acute fluid and electrolyte losses and for correcting mild acidosis.[5] A link below shows the manufacturer's label information for Lactated Ringer's Solution. [6]

Retrieved from "https://diabetesindogs.fandom.com/wiki/Subcutaneously?oldid=26345"
Community content is available under CC-BY-SA unless otherwise noted.