Ketones in the urine or blood, as detected by urine testing stix or a blood ketone testing meter, [1] may indicate the beginning of diabetic ketoacidosis (DKA), a dangerous and often quickly fatal condition caused by low insulin levels [2] combined with certain other systemic stresses. DKA can be fixed if caught quickly.

Because of the hyperglycemia Cushing's disease creates, it's possible (but not frequent) to find ketones in the urine. [3]

The three ketone bodies are acetone, acetoacetic acid, and beta-hydroxybutyric acid, with the predominating ketone body formed being beta-hydroxybutyrate acid. [4] Though they are referred to as "bodies" this is a misnomer as they are dissolved substances. [5][6]

Ketones are produced by the liver as part of fat metabolism and are normally not found in sufficient quantity to be able to be measured in urine or blood (non-diabetics or well-controlled diabetics). [7] Since the body is set up to normally burn glucose as its fuel, when glucose isn't available as an energy source, (untreated/poorly treated diabetes and some other unrelated medical conditions), it begins to burn fat for energy instead. The result of the body turning to burning fat instead of glucose means more ketone production which is able to be measured when testing either urine or blood for them. [4][6]

Diabetics of all species therefore need to be checked for ketones with urine testing stix, available at any pharmacy, whenever insulin level may be too low, and any of the following signs or triggers are present:

Note that the triggers and signs are somewhat interchangeable because ketoacidosis is, once begun, a set of vicious circles which will make itself worse. So dehydration, hyperglycemia, fasting, and presence of ketones are not only signs, they're also sometimes triggers.

How to check[edit | edit source]

When testing urine for ketones, the sample needs to be as fresh as possible. Ketones evaporate quickly, so there's a chance of getting a false negative test result if you're testing older urine. [16] The stix [17] bottle has instructions and color charts to show you how the color on the stix will change given the level of ketones/glucose in the urine over 15 (ketones-Ketostix) or 30 (glucose-Ketodiastix) seconds. Be sure to read the colors at those time intervals because the colors will continue to darken and a later reading will be an incorrect result. Timing with a clock or watch second hand instead of counting is said to be more accurate/ [18] The Bayer-made, ReliOn branded ketone urine test strips sold by Wal-Mart and Sam's Club have the same instructions and color key as the Bayer brand, Ketostix. [19]

It's important to time the test accurately and not take into account any color changes on the Ketostix strip which occur after 15 seconds. [20]

At low levels, ketones can be detected in the urine (ketonuria) before they are found in the blood (ketonemia/ketonaemia). [21]

Most urine tests for ketones measure acetoacetic acid, not the most common beta-hydroxybutyrate acid. [4]

If your pet is taking any type of vitamin supplements, it should be noted on his or her medical records. Knowing that he/she is using them means being able to factor them into interpretations of test results.

When to come to the vet[edit | edit source] 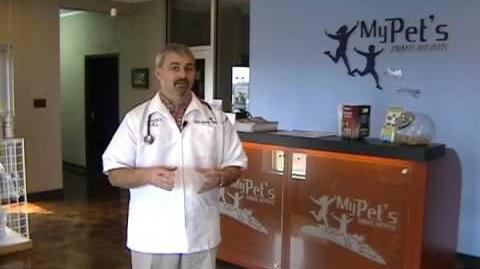 Overview of type 1 diabetes-how it's treated; how ketoacidosis begins and its treatment.

Trace urinary ketones may or may not be an emergency, depending on the case. If a vet is unavailable, look for some of the other signs or triggers, and try to remedy any you can. Give extra water and food, by syringe if necessary. If it's nearly time for an insulin shot, give one. Continue testing and call a vet when possible.

DKA cannot be treated at home. Veterinary care for DKA involves intravenous (IV) fluids to counter dehydration [37] and flush the animal's system of the ketones [38] and when necessary, to replace depleted electrolytes, [39][40][41][42] such as bicarbonate; [43] intravenous or intramuscular [44] fast-acting insulin to bring the blood glucose levels down; [45][46][47] measured amounts of glucose or force feeding, sometimes by feeding tube, to force the metabolism back from fat-burning to glucose-burning.[6]

Many times, the polyuria of hyperglycemia and ketosis means too much potassium leaves the system via the too-frequent urination, so it's possible for the body to be low on potassium because of it. However, insulin's other use besides controlling blood glucose, is when a patient has too much potassium, or hyperkalemia. [48]

What happens then is we have someone whose potassium levels are low from too much urination and who must have insulin to manage blood glucose levels, with the knowledge that the use of the needed insulin will further deplete the potassium in the system. [49] Many doctors opt to use Ringer's with additional potassium to bring the body back into balance. [50]

Dehydration becomes involved with ketoacidosis, which can mean that subcutaneous insulin injections are not properly absorbed; [51] when this occurs, intravenous treatment with soluble, short-acting insulin is needed. [52], along with rehydrating intravenous fluids [53]

Dr. Michael Herrtage describes the situation well in his WSAVA presentation, "In diabetic ketoacidosis, there are serious derangements in fluid, electrolyte and acid-base status." [44]

Veterinary care for DKA may involve a hospital stay of five days or more and cost, in the U.S., $2,000 or more. Some animals are DKA prone, and may have multiple episodes of the condition.

Veterinarians have sometimes been known to send pets home from a DKA episode while still displaying ketones in the urine due to owner financial constraints -- this can turn into a fatal mistake. Your chances of fixing the problem yourself are slim. If your cat or dog comes back from the hospital and still has ketones showing on urine testing stix, it's usually best to find the financial means to go right back to the vet's as your pet may need to stay in hospital longer.

How it happens[edit | edit source]

Our bodies normally are "fueled" by burning glucose; they are able to do this provided they have enough insulin (normally or by injection). When there's not enough insulin to allow the body to burn glucose for energy, it begins metabolizing fat to fuel its cells. In particular, the brain cannot go without energy even for a second, so it demands fat conversion to ketones when glucose energy is unavailable. [54] Continuing this process using fat and ketones instead of glucose without sufficient insulin intervention is the path to ketoacidosis.[6]

Adapted from the Wikipedia:

Normally, ketone bodies are produced in minuscule quantities, feeding only part of the energy needs of the heart and brain. When insulin is inadequate, fat must be turned into ketones for energy instead, and they rapidly become a major component of the brain's fuel. As a result, the bloodstream is filled with an increasing amount of glucose that it cannot use (as the body continues adding glucose to the blood with gluconeogenesis and perhaps also glycogenolysis). This extra glucose significantly increases its osmolality.

At the same time, massive amounts of ketone bodies are produced, which in addition to increasing the osmolal load of the blood, are acidic. As a result, the pH of the blood begins to change. The trace element balance of the system is altered by falling bicarbonate blood levels and rising serum potassium levels. The potassium level of the body as a whole is reduced by the polyuria of ketoacidosis. [55][56] There can be changes in breathing (deep, sighing breaths) because the ketones themselves are acids. Any type of acidosis can affect the respiratory system.[6]

Glucose begins to spill into the urine as the proteins responsible for reclaiming it from urine reach maximum capacity. As it does so, it takes a great deal of body water with it, resulting in dehydration. [50] The over-frequent urination takes vital minerals such as salt and potassium with it.[6] These are known as electrolytes [57] and the right balance of them controls many automatic body functions, such as heartbeat, etc. [58][43] Dehydration worsens the increased osmolality of the blood, and forces water out of cells and into the bloodstream in order to keep vital organs perfused.[6] The vicious cycle is now set, and if untreated will lead to coma and death. [59]

How likely is it?[edit | edit source]

Since diabetic dogs are considered insulin-dependent--unable to naturally provide any of their own insulin needs once diagnosed with diabetes--they are prone to ketoacidosis. [60] About 40% of newly-diagnosed canine diabetics have some amount of ketones when they are brought to the vet. [61]

The usual method of testing for ketones is with urine testing stix, available at any pharmacy. When testing urine for ketones, the sample needs to be as fresh as possible. Ketones evaporate quickly, so there's a chance of getting a false negative test result if you're testing older urine. [16]

At low levels, ketones can be detected in the urine (ketonuria) before they are found in the blood (ketonemia/ketonaemia). [62]

At present there is only one device for consumers who wish to test blood instead of urine for ketones--Abbott's Precision Xtra glucometer. [63] The meter is known by the brand name Precision/Optimum/Xceed outside of the US. [64][65]

The premise behind blood testing for ketones is the same as that for favoring glucose testing of blood over urine. [66][67][18] The urine ketone measurement, like urine glucose measurement, can be hours old; testing blood for both gives current values as of testing time. [68][69][70][71][72]

Testing blood for ketones also means there are less medications and other things like lipids which can interfere with the accuracy of the test. [73] Children with Diabetes [74] advises every family with a child with diabetes should have this type of meter because of its blood ketone testing ability. The ketone test strips are about $30 for 10 individually-wrapped strips. The Precision Xtra also does blood glucose testing with standard blood glucose test strips made for use with the meter.

When the bg readings are high enough to produce some ketones, you've taken action to bring them down and they are normal once more, it is possible to still see some positive urine ketone test results. Ketones show up in the urine right away. When you're getting normal bg readings, it means that there are no more ketones being produced. What you are seeing when you test urine for ketones and the blood glucose is in normal ranges are the "leftovers" of the ketones which were produced by the high bg episode. They will continue to show up in the urine for a while but their concentration will become less and less until they're gone. [75][76][77]

Retrieved from "https://diabetesindogs.fandom.com/wiki/Ketoacidosis?oldid=26288"
Community content is available under CC-BY-SA unless otherwise noted.