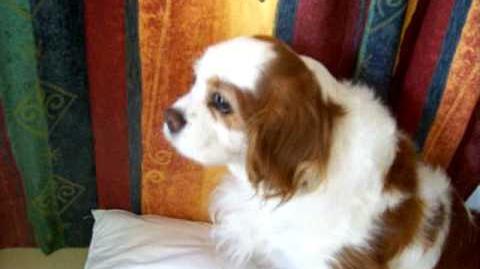 Jasmine having a seizure from low blood glucose or hypoglycemia-Quote from Jasmine's family: "IF YOU SEE THIS OR SIMILAR SYMPTOMS IN YOUR DOG, TAKE HIM/HER TO THE VET IMMEDIATELY. Diabetes and the resulting symptoms such as severe hypoglycemia CAN BE LIFE THREATENING."

Hypoglycemia, also referred to as an insulin reaction, [1] is what every diabetic fears -- very low blood glucose. Since the brain requires glucose for fuel at every second, [2] it's possible to induce coma, seizures, brain damage [3][4][5] and death by letting blood glucose drop too low. Because the brain is almost totally dependent on glucose to make use of oxygen, [6] it is somewhat like having severe breathing problems. Though the causes and mechanisms are different, in both cases the brain does not have enough oxygen, and similar symptoms and problems can occur. It is caused by giving too much insulin for the body's current needs.

The blood glucose level at which an animal (or person) is dangerously hypoglycemic is fuzzy, and depends on several factors. [7] The line is different for diabetics and non-diabetics, and differs between individuals and depending on exogenous insulin and what the individual is accustomed to.

The most likely time for an acute hypoglycemia episode is when the insulin is working hardest, or at its peak; this is when blood glucose levels are at their lowest, or nadir, due to the action of the insulin. Mild lows may cause lethargy and sleepiness. [8]

An acute hypoglycemic episode can happen even if you are careful, since pets' insulin requirements sometimes change without warning. Pets and people can have hypoglycemic episodes because of increases to physical activity. [9][10] What makes those with diabetes prone to hypoglycemia is that muscles require glucose for proper function. The more active muscles become, the more their need for glucose increases. [11] Conversely, there can also be hyperglycemic reactions from this; it depends on the individual/caregiver knowing him/herself and the pet's reactions.

Unexpected or infrequent exercise can mean a "surprise" hypoglycemia episode. Any event that means more than the usual (and planned for) activity, can cause a low, since the food that supplies energy is used faster than expected. [10] Some extra food before or directly after the exercise or excitement can make this easily managed. Excitement generally means more activity than normal, so it needs to fall into the category of "exercise" and possibly "fed" to avoid low blood glucose problems. [12]

Vomiting [9] and diarrhea [13] episodes can bring on a hypoglycemia reaction, due to dehydration or simply because there's more insulin than properly digested food.

According to a 2000 JAVMA study, dogs receiving insulin injections only once daily at high doses [14] are more likely to have hypoglycemic episodes than those who receive insulin twice daily.

See stacking/piggybacking Insulin for information as to how this corrective insulin practice and overlap, if not used with caution, can cause hypoglycemia.

Symptoms of hypoglycemia should always be taken seriously and addressed promptly. Better to risk treating a "non-legal" hypo than to fail to respond quickly to the signs of actual hypoglycemia. [8][23]

Serious hypoglycemic episodes need medical attention. At a hospital or Emergency facility, infusions of dextrose can be administered, and if need be, the hormone glucagon can also be used, as in the treatment of people with diabetes when there is a serious low blood glucose problem. [4][32]

Its also important to remember that it takes a little time to fully come back from a hypo incident. In people, cognitive function is impaired at levels below 54mg/dL. Full recovery from the hypo can take 40-90 minutes after blood glucose levels have returned to normal. [33] Like insulin, the sugar given doesn't have a total effect instantaneously.

Sometimes a mild hypoglycemic episode will go unnoticed, or leave evidence such as an "accident". In these cases the blood sugar will often be paradoxically high upon the next test hours later, since the pet's body will react to the low blood sugar by stimulating the liver to release stored glycogen. This condition is known as Somogyi rebound, [34] and requires a lowered insulin dosage for the next few days. The Somogyi rebound may also occur when the pet's blood glucose drops too rapidly, even if it never actually reaches a low reading.

A single hypoglycemia or near hypoglycemia episode [35] can result in hyperglycemia for up to 3 days following it. In response to the threat of low blood sugar, the body releases counter-regulatory hormones intended to raise bg's; the body's way of trying to save itself.

Continuing episodes of hypoglycemia can lead to peripheral neuropathy. [36]

People and pets can also exhibit signs of hypoglycemia if their glucose levels drop rapidly. [37] This is true with the use of all insulins, even though glucose values are not in hypoglycemic range. [38]

For example, let's say someone's bg is at 400. He/she uses fast or rapid-acting insulin for corrective purposes which lowers the blood glucose values to 200 within an hour. The meter says 200, but there are signs of hypo. The body responds to the rapid drop as it automatically is meant to, sending out hypoglycemic warning signs, even though the 200 reading is far from hypo levels.

The system can only determine that blood glucose levels are falling at a rapid rate, not whether they are "supposed to" in this hypothetical case, and sends out "hypo" warning signals to protect itself. [39] This may include glycogenolysis, leading to a Somogyi rebound, or it may not.

In both hypoglycemia and hyperglycemia, the inflamation lessens as the proper bg corrections are made, reverting to no visible irritation when euglycemia is achieved. The symptoms were first discovered with an individual dog, and extended to all diabetic dogs in the veterinary practice. All presented with the same degree of eye inflamation for hypoglycemia, hyperglycemia or lack of it for euglycemia. The eyes were examined prior to blood testing, which confirmed the eye results each time.

The question of why some diabetics exhibit more overt signs of low blood glucose than others came up in a talk with a Certified Diabetes Educator who is also a registered nurse. Her response was that the better one's control is, the lower someone's blood glucose can go without them feeling or showing signs of illness. It has to do with the blood glucose levels not dropping as far and thus the body doesn't feel the need to send out as many "warning" signals.

Therefore, if one is always primarily high, he/she would show more physical responses to low blood sugar levels than someone whose control is tight. (Going down 25 floors rapidly in an elevator may not make your ears "pop"--going down 50 rapidly likely will.) Personal experience says this also holds true for canines with diabetes; those in tight control can show few, if any, hypo symptoms even though the meter says otherwise.

Dr. Orzick, a professor at Baylor College of Medicine in Houston, also says that the rate at which blood glucose levels fall is the primary reason for lack of body warning responses. [40] He also offers an opinion regarding longer-duration insulins: that for some using them, blood glucose levels fall at rates too slow for the body to recognize and thus set the hypoglycemic warning responses into action.

Many humans with diabetes suffer from what's known as hypoglycemia unawareness. This means they often have no physical warning signs they are low and approaching hypo status. There's been much research regarding the unawareness factor in the human diabetes community but for the most part, there have been few real solutions. Those with this condition must test many, many times a day, as they have no other way of telling whether they are too low or not.

Some people using insulin have had their physical hypoglycemia symptoms return after switching to either bovine or porcine insulins from either r-DNA/GE/GM or analog ones.

What has definitely been learned from all the human research into the problem is that having serious hypoglycemia episodes puts one at risk for becoming hypoglycemia unaware. A person who is a "long time" diabetic can also become unaware, due to the subtle changes the disease makes in the body over time.

Medication warnings mentions medications that can cause problems with hypoglycemia.

Retrieved from "https://diabetesindogs.fandom.com/wiki/Hypoglycemia?oldid=26420"
Community content is available under CC-BY-SA unless otherwise noted.